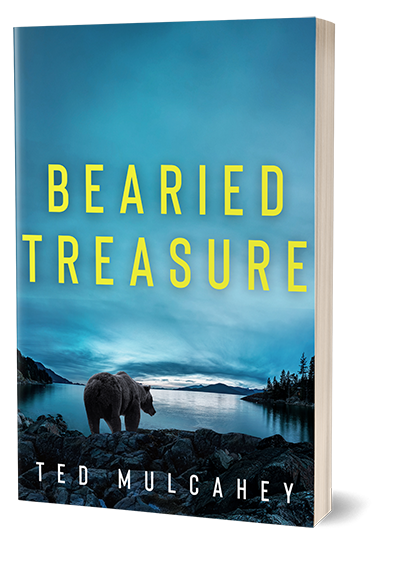 If you like to mix a little reality into your fiction, then you’ll enjoy this clever offering from Ted Mulcahey.

Some Adventures Leave You Questioning, “How Did I Get Here?”

What do you get when you mix a 1920’s cult, a couple of interior designers, the Pacific Northwest, a small fortune in gold, and a Kodiak bear?

You get this clever and adventurous “what if” story weaving real-life historical characters with the imagination of Ted Mulcahay–Bearied Treasure.

Are you struggling in life? Maybe you have an addiction or you’re in a bad marriage. Perhaps you simply need a new beginning…

Brother XII is waiting for you on DeCourcy Island, just off the coast of British Columbia where he is the remnant of a cult that resided on the island in the 1920s. There he is recreating the idyllic setting his grandfather started with the Aquarian Foundation.

But rumors abound about a stash of gold hidden somewhere on the island from the commune’s founding days.

And with those rumors come scammers in search of the treasure.

Join interior design husband and wife Kevin and Jenne O’Malley, along with commune members and con men as they search for hidden fortune in an otherwise unassuming Pacific NorthWest refuge.

This tongue-in-cheek tale of fiction is based loosely on real people and places.

Will the con artists make off with the gold?

Will the O’Malleys be able to help stop them?

What will become of Brother XII and the other members of the cult?

What’s the deal with the bear?

To find out, you’ll have to read Bearied Treasure and see where Mr. Mulcahey’s adventure will take you.

Pick up your copy today by clicking the BUY NOW button at the top of this page! 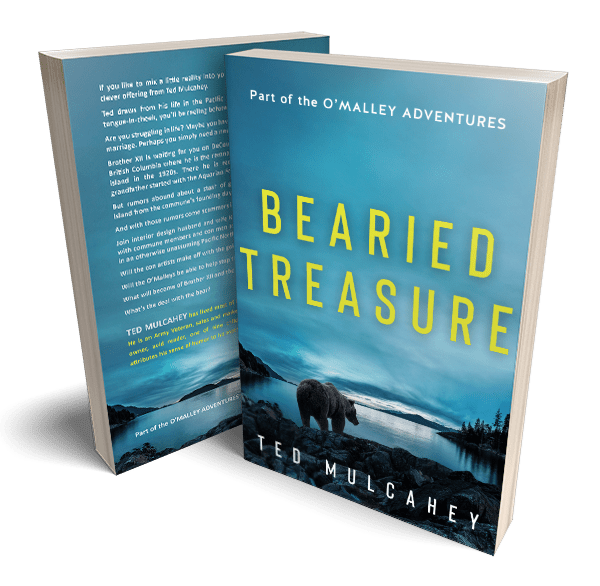 Ted Mulcahey has lived most of his life in the Pacific Northwest. He is an Army Veteran, sales and marketing VP, entrepreneur, business owner, avid reader, one of nine children, and proud husband who attributes his sense of humor to his mother and his wife.

Ted Mulcahey has done it. He’s woven a clever tale that will leave you reeling between reality and adventurous fiction. In his new book, Buried Treasure, Ted has mixed perhaps the most unusual band of characters plus one enormous bear. He’s managed to create a story with just enough historical accuracy to leave you asking, “Is this for real?”

Great entertainment for these times!

Pick up your copy today!